On Monday morning the music on my phone alarm pulled me out of a deep sleep in my cozy bedroom in Madrid so I checked the window to see that the rain was gone. The first day of the U.N. COP25 climate conference had finally arrived! With ten people staying together in this Air B&B flat on the Christian Observers program (7 women and 3 men), bathroom time would certainly be limited, so hustled in and out and put on my business suit in a hurry. Lowell Bliss, our leader and spiritual guide on this trip asked us to join him at 7:30 am for breakfast and a devotional, and I didn’t want to miss it.

Most of our group was already gathered with Lowell around the large dining room table under a bright florescent light as I settled into a chair with my boiled egg and coffee. With a welcoming smile Lowell thoughtfully began speaking about our first day at COP25. He shared stories from the Bible that said the kingdom of God is a treasure, it is like yeast, a pearl, a mustard seed, organic and hidden. He encouraged us to see our experience at this conference the same way. We cannot know what kind of information we will encounter within those walls that will increase our understanding, and who we meet that will enrich our experience. We might see this opportunity as a treasure hunt just waiting to be discovered, and our interactions as mustard seeds that will grow into something substantial. I found Lowell’s theology so helpful that I jotted some of his words on a napkin and made a mental note to bring my notebook the next morning.

We bundled up in our coats and stepped into the cold morning air as a group and headed up a long hill to the metro station. It was crowded with morning travelers and we had to work hard not to lose each other as we negotiated the three trains that took us to the convention site. When we arrived at the final stop, two women with a wind energy group were handing out bags of swag to everyone who walked by, and the walls were covered with slogans about climate change. We had arrived!

Once in the hall we quickly made our way through security and took the obligatory photo in front of the COP 25 sign, and then headed to the first plenary session and opening ceremony. The word spread within our group that our passes wouldn’t allow us entry into the main hall where the world leaders were already negotiating inside, so some headed to other venues, but we were feeling brave and walked on through security. They looked at our badges and nodded us in. Excellent! The enormous convention room was filled with chairs for observers in the back that were all taken, and then lines of desks with microphones and paper signs with the names of all the countries in the world filled the rest of the hall. At the front of the room there was a tall, well-lit stage with dignitaries seated at a long table. They were so far away that I could only see their shapes, but the large tv’s around the hall projected video of a man with a heavy accent expressing his unhappiness about an agreement that he claimed was decided on yesterday but was being changed today. There weren’t any seats, so we found a spot against the wall and sat down to try to make sense of it all. After about 15 minutes the session ended, and we now understood that this hall was for the delegations to interact to set the rules through parliamentary procedure. We checked our long list of information sessions going on and headed off to the Climate Action Network (CAN) Capacity Building for Newcomers to COP seminar that sounded helpful.

I did my homework before coming to COP25 so the information we received was familiar. Speakers shared on Loss & Damage (referring to the severe impacts of climate change that hurt poor countries and who need to be compensated financially by rich polluting countries that have caused the climate crisis); Ambition (the amount of green house gases countries pledge to reduce to meet the Paris Agreement’s obligation to keep our planet’s warming below 1.5 degrees C); and Climate Finance (money that developing countries receive from wealthy ones for mitigation and adaptation projects). A major focus of this COP was to get more money for Loss & Damage because poor countries were already suffering the worst impacts of climate change and could not afford to recover from extreme droughts, floods, cyclones, and sea level rise. They need the rich countries to help them financially to avoid terrible human rights issues like starvation, mass migration, and even death of their people. It was heavy stuff and I was glad the U.N. was addressing the moral and human rights aspects of climate change.

After the seminar was over, I got a message from my Facebook friend and fellow Earthkeeper Mel Caraway of Texas that the U.S. Congressional Delegation was about to give a press conference, so I packed up and hurried over. We finally met in person and shared a big hug, and talked about what we were doing back home. He learned that only the press were allowed in the meeting so we stood outside, getting a little peek of what was happening in the room through the glass windows. A few minutes later Mel realized that we could walk around the right side of the walled off room close to the side doors to get a better view of the delegation on the stage and to hear what they were saying. I saw Speaker Nancy Pelosi in a coral suit right in the front, and she was very animated as she declared “We Are Still In!” This gave me a lot of pride because our group felt the loss of not having a positive U.S. presence here now that Trump was pulling out of the Paris Agreement and was a climate denier. I heard Speaker Pelosi say that the USA was pledging to be 100% carbon neutral by 2050, and then she said “We will be addressing this crisis with three words: science, science, and science. Well maybe four, science!” to laughter in the room. Then Florida Representative and Select Committee on the Climate Crisis Chairwoman Kathy Castor spoke and said that her committee is hoping to turn policy proposals into legislation but needed bipartisan support. “There is urgency and the time for action is now,” she told the writers in the room.

I stood outside the door and listened to the entire presser, and to my surprise the delegation exited the room through that door and then Speaker Pelosi was standing right in front of me! I thanked her and introduced myself as a Creation Care leader from Florida, and she shook my hand, smiled, and said “You need to meet Kathy!” Rep. Castor was right behind her and she was welcoming as we shook hands and I explained that I lived in Tallahassee and was grateful for her work on climate change. She put her bag down and we talked for about five minutes about how she would like to do more with the faith community and perhaps we could work together on an advocacy day at the capitol next year. She said that there was a faith-leaders meeting tomorrow and that I should attend. Her assistant gave me her card and said she would let me know the details. We took a photo together and I thanked her again. I couldn’t believe my luck!

Then I remembered Lowell’s devotion that morning, how at this conference we are searching for treasure that will enhance our ability to work on the climate crisis, just like we are search for the kingdom of God. I had this feeling move through me to my toes that perhaps me meeting the most powerful women in the U.S. government wasn’t just by chance. I said a prayer of thanks as I walked away with a big smile on my face. 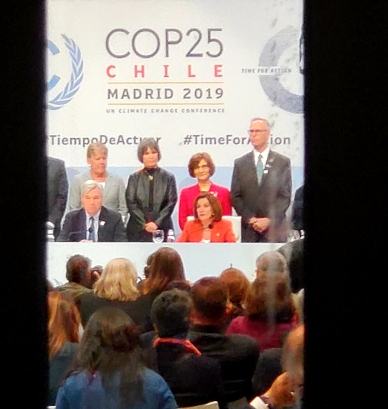 I'm a Mom on a mission to #talkaboutclimate, protect our earth, and love on people. View all posts by Cara Fleischer